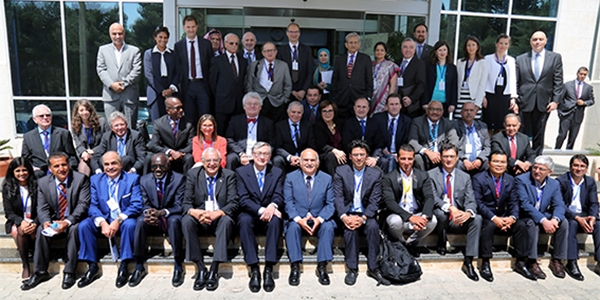 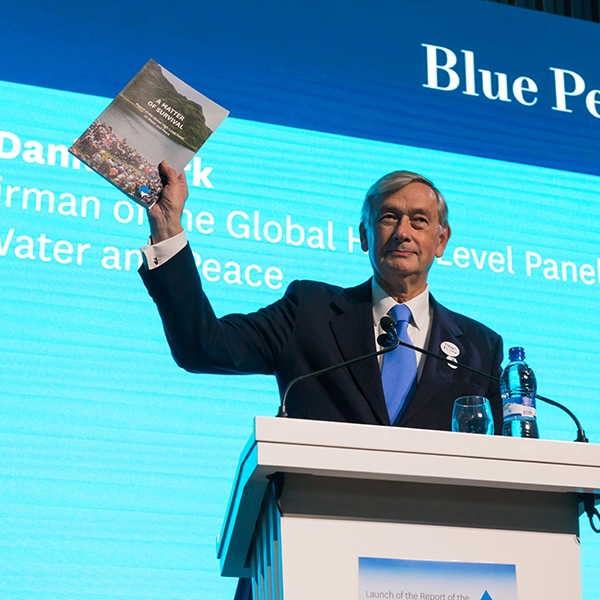 The Global High-Level Panel on Water and Peace was launched on 16 November 2015 in Geneva with the task of developing a set of proposals aimed at strengthening the global framework to prevent and resolve water-related conflicts, and facilitate the use of water as an important factor of building peace and enhancing the relevance of water issues in national and global policy making.

The issue of “Water and Peace” has many facets. The Panel was asked to focus on four main themes:

Panel Members are serving in their individual capacity. The Panel is independent and is tasked with outlining concrete proposals and recommendations to enable water to be an instrument of peace. These proposals will be non-binding and will address policy issues at all levels (global, regional, national and local). The Panel will not however make any country specific recommendations.

While the Panel is entirely independent, it has worked in close cooperation with relevant stakeholders, notably with the UN which is represented in the Panel through UN-Water as observer and which is involved in all sessions.

The Panel has met four times: in Geneva, Switzerland, in Dakar, Senegal, in San José, Costa Rica and in Amman, Jordan. Each time, it has met with regional experts in order to feed its reflection.

The Geneva Water Hub acts as Secretariat of the Panel. The Strategic Foresight Group, a think tank based in Mumbai, supports the work of the Panel.

In September 2017, the Global High-Level Panel on Water and Peace launched the final recommendation Report in Geneva and in New York. The Report was then presented at the 2018 World Water Forum in Brasília, 18-23 March 2018. 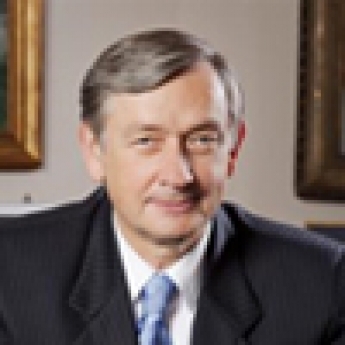 Prof. Danilo Türk, nominated by the Republic of Slovenia

Prof Türk had a rich and varied career as an academic, as a diplomat and as UN official. In the years 1984-1992, he wrote several UN reports on human rights. In the years 1992-2000 he was Ambassador, Permanent representative of Slovenia to the UN in New York. He served on the UN Security Council in 1998-1999 and was President of the Security Council twice. Between 2000-2005, he served as UN Assistant Secretary-General for Political Affairs, at the invitation of Mr. Kofi Annan, then UN Secretary-General. In that period he worked on a variety of diplomatic projects of the UN, including in the field of preventive diplomacy. In the year 2016 he was a candidate for the post of UN Secretary-General. His genuine commitment as Chairman of the Global High-Level Panel on Water and Peace (2015-2017) was key to the success of the work of the Panel. 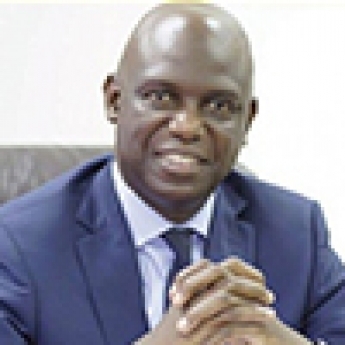 H.E. Mr. Mansour Faye, nominated by the Republic of Senegal

Minister of Hydraulics and Sanitation of the Republic of Senegal since July 2014.

Mayor of the city of Saint-Louis that is located at the mouth of the Senegal River.

Under Mr. Faye’s tenure, Senegal reached the Millennium Development Goals (MDGs) for drinking water and sanitation. He was one of the architects of the first public debate on "Water, Peace and Security" launched by Senegal during his presidency of the United Nations Security Council in November 2016. This debate led the Council to reflect on the ways making water a means of international cooperation rather than a "vector of conflict". He was member of the Organizations for the Development of the Senegal River (OMVS) and for the Development the Gambia River Basin (OMVG). He also chaired the African Ministers’ Council on Water (AMCOW) from 2014 to 2016 and he currently chairs the African Water Facility (AWF). 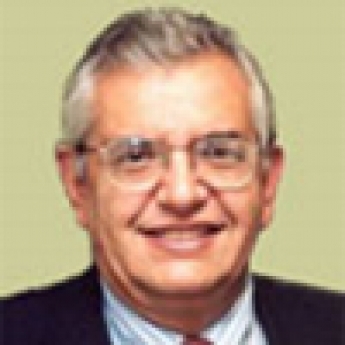 Currently co-chairs Climate Transparency, an organization dedicated to monitor and rate country progress toward compliance of the Paris Climate Accords.

With an academic background in environmental science and engineering as well as economics, Dr Alvaro Umaña has a long relation with United Nations institutions including having been a member of the Executive Board of UNESCO, Chairman of the World Bank Inspection Panel, Leader of the UNDP Energy and Environment Group, and representative of Central America on the Board of the International Monetary Fund (IMF).

Members (by order of nomination by co-convening country) 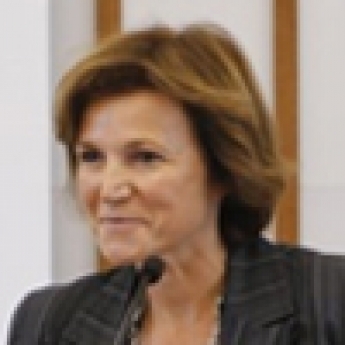 Professor at the Law Faculty at the University of Geneva.

As an academic and a practitioner, Laurence Boisson de Chazournes has been a renowned expert who has worked in different regions of the world for many years. She has contributed to the strengthening of the Organization for the Development of the River Senegal (OMVS) and to the negotiation of the agreement on the River Nile. She has also served as an arbitrator in an Indus Waters dispute and is an advocate in international litigation involving rivers in Latin America. 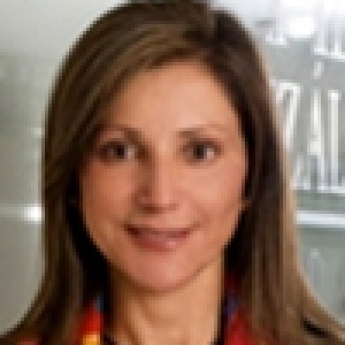 Dr Claudia Patricia Mora, nominated by the Republic of Colombia

Former Vice Minister of Water and Sanitation of the Republic of Colombia.

Currently Partner and head of the Environmental Law Department at the Pinilla, González and Pieto Abogados Law Firm.

Claudia Mora is a lawyer by profession with wide experience in environmental law as well as public utilities regulation. Claudia was Superintendent of Public Services for Drinking Water and Sanitation. Under her leadership, important environmental regulations and policies were issued such as the National Water Policy (National Policy for the Integral Management of the Water Resource – 2010). 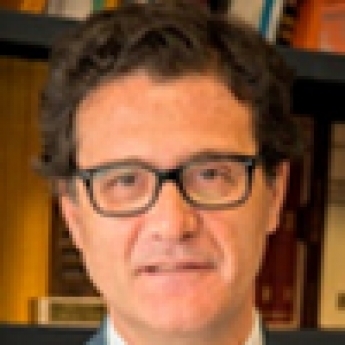 Former State Secretary for Water and Seashore of Spain.

Currently Professor of Applied economics in the field of environment at the Juan Carlos I University of Madrid.

He has served in his country as General Director of Taxes in the Regions of Castilla and León and in Madrid. He is author of 11 books and several research papers in applied economic. Actually is the Dean and Chairman of the Madrid Economists Association. 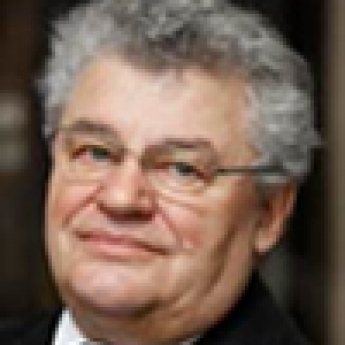 Professeur Andras Szöllösi-Nagy, nominated by the Republic of Hungary

Former Rector for the UNESCO-IHE Institute for Water Education in Delft from 2009 to 2014.

Currently professor of Sustainable Water Management at the National University of Public Service in Hungary.

Dr András Szöllösi-Nagy has 30+ years of experience in water resource management; In addition to many years of research and teaching, he served for 20 years as Secretary of UNESCO’s International Hydrological Programme (IHP) where he was instrumental in initiating and launching the UN World Water Assessment Programme (WWAP). He is a founding member of the World Water Council (WWC). 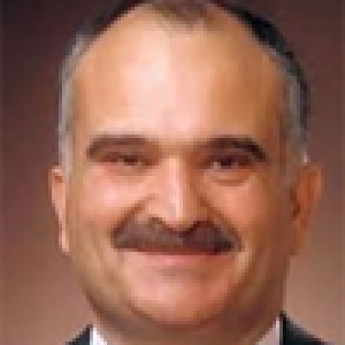 Chairs the United Nations Secretary General’s Advisory Board on Water and Sanitation (UNSGAB).

His Royal Highness Prince El Hassan bin Talal has chaired the Independent Commission on International Humanitarian Issues, and contributed to their report “Winning the Human Race”; which addresses issues such as man against man, man against nature and natural disasters. HRH also chairs the Strategic Foresight Group’s initiative called Blue Peace which focusses on water’s key role in all areas of security. 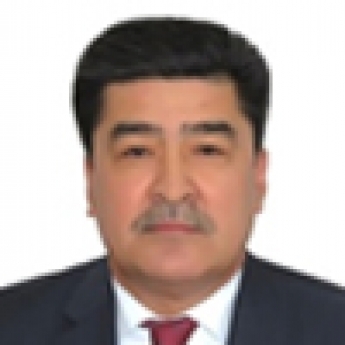 Vice Minister of Agriculture of the Republic of Kazakhstan.

Vice Minister of the Environmental Protection in the Republic of Kazakhstan since 2013. 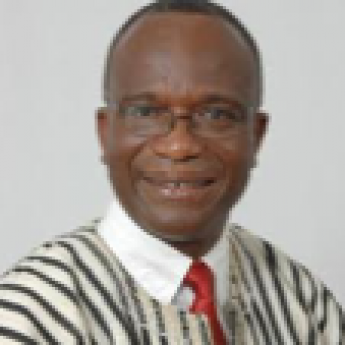 Hon. Mike Hammah, nominated by the Republic of Ghana

Former Minister for Land and Natural Resources of the Republic of Ghana.

It is with his long political experience and knowledge of the private sector that Hon Mike Hammah has contributed to the work of the Panel. Mr. Hon Mike Hammah is a politician and a professional quantity surveyor. He has held many positions in the Ghanaian political space including during sixteen years as member of the Ghanaian parliament (for Effutu constituency) and for 12 years as deputy Minister for roads and transport, Minister for transport and Minister for lands and natural resources. He is currently a construction cost consultant and a risk management consultant. 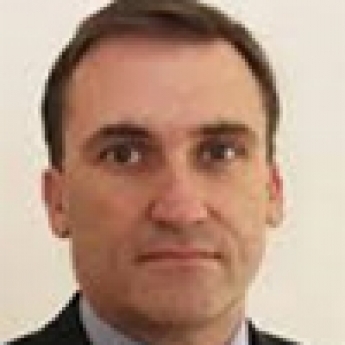 Mr. Ciaran O’Cuinn, nominated by the Sultanate of Oman

Center Director of the Middle East Desalinization Research Center of the Sultanate of Oman since 2013.

From 2002 to 2011, Mr. Ciaran O’Cuinn has acted as Special Advisor to the Minister at the Department of Communications, Energy and Natural Resources, at the Department of Foreign Affairs and Trade and finally at the Department of Justice and Equality of the Republic of Ireland. He has then served as Executive Director of External and Strategic Affairs at the Dublin City University. Since 2013, he is the Center Director of the MEDRC of the Sultanate of Oman, a unique international organization that works to build solutions to fresh water scarcity across borders and divisions. 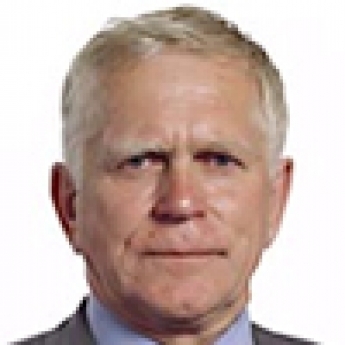 Former Prime Minister of the Republic of Estonia.

With an academic background of climatologist and researcher, Andres Tarand had led the negotiations between Russia and Estonia for the demarcation of the border which is mainly in courses of rivers and lakes. He has also been a Member of the Estonian Parliament as well as a Member of the European Parliament for the Social Democratic Party. He has been involved in various organizations with environmental and sustainable development concerns, such as the Estonian Geographical Association, the Estonian Institute for Sustainable Development, the Stockholm Environment Institute, the Estonian Nature Fund, and Globe International Europe. 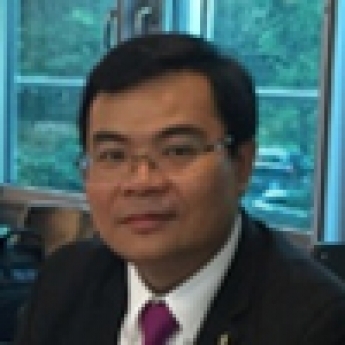 State Secretary of the Minister of Water Resources and Meteorology of the Kingdom of Cambodia since 2013.

Currently State Secretary of the Minister of Water Resources and Meteorology.

H.E Thor Chetha earned a Masters Degree in Political Science and Bachelor Degree in public law. He also earned High diploma in the field of Public Leadership, Administration and Good Governance from Nanyang University, Singapore, received high certificate in the field of Commerce Policy Development for GMS from Singapore and attained Diploma in the field of Mine Management from the United States. He has been assigned to be a co-chairman for the CAVAC II (Cambodia Agricultural Value Chain Program). 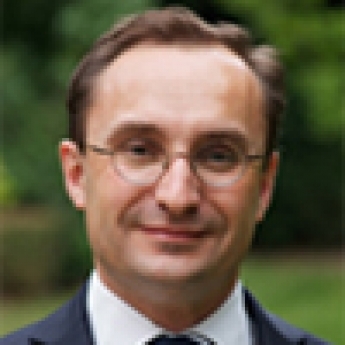 Founder and CEO of Environmental Emergency and Security Services for the French Republic since 2010.

Mr. Galland is currently considered as one of the leading French expert in strategic and security issues related to water. He also made extensive research on the vulnerabilities of critical infrastructures such as water supply systems. He is the author of three well-received books and about fifty research papers published in reviews of international relations and defense. As a background, he spent 20 years working in the water industry and is currently the CEO of an engineering firm specialized in resiliency and contingency planning for utilities. Mr. Galland is also a reserve officer (rank : Lt-Colonel) serving as a water expert for the French Ministry of Defense.

General Engineer and reserve officer, Mr. Ameziane is one of the leading Moroccan experts in the field of water resources, including on regulatory and institutional aspects. With 30 years of experience in water research and management, including during periods of conflicts, he contributed to the development of the national water strategy and leaded several reforms of the water sector in Morocco, notably on the aspects related to intersectorial conflicts. 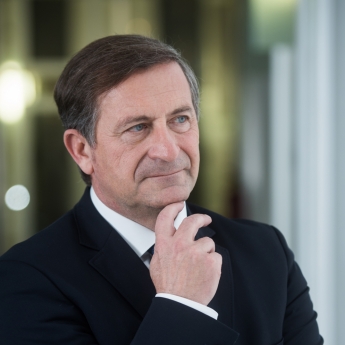 Minister of Foreign Affairs of Slovenia 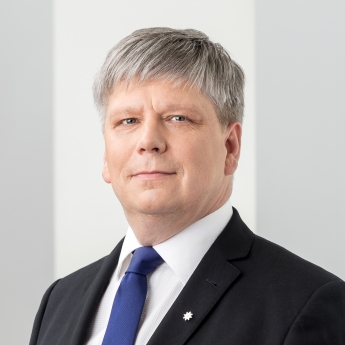 Minister of Environment of Estonia 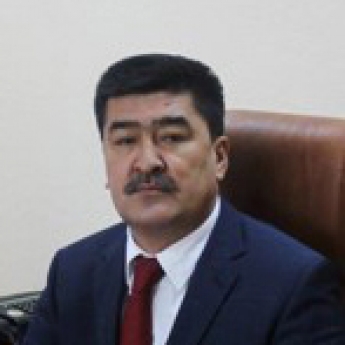 “Peace and security through water cooperation.” 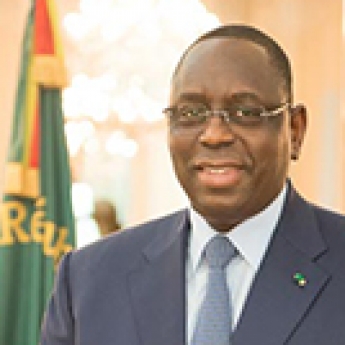 “Water is a source of life and well-being when its use calls upon cooperative spirit and sharing.” 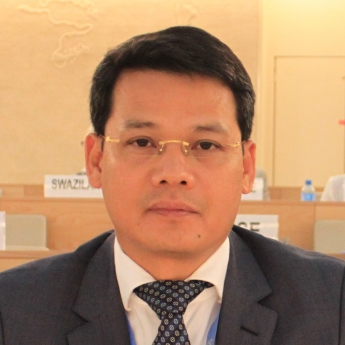 Ambassador Extraordinary and Plenipotentiary, Permanent Representative of the Kingdom of Cambodia to the United Nations Office and other international organizations in Geneva.

Input documents to the reflection of the Panel

The Global High-Level Panel on Water and Peace's messages and recommendations are finalized, they have also been conveyed in the universal language of music. Indeed, a unique and particularly inspiring feature of the Panel’s work is that it is accompanied and enriched by musicians from around the world. The result, an original Symphony for Water and Peace, has been composed progressively as the Panel convened in different continents. The Symphony for Water and Peace is intended to become a powerful symbol and inspiration for all efforts to make water a source of cooperation and peace.

More information and music can be found here.

"INTENSIFIED ACTION", the second annual follow-up report of the Geneva Water Hub, Secretariat of the Global High-Level Panel on Water and Peace. 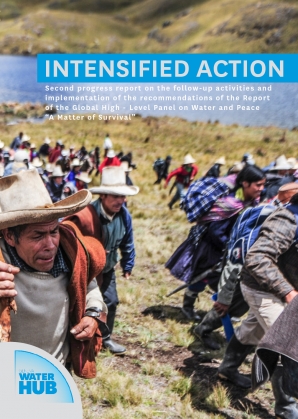 "DETERMINED STEPS" Report
Follow-up Activities and Implementation of the Recommendations of the Report of the Global High-Level Panel on Water and Peace “A Matter of Survival”. 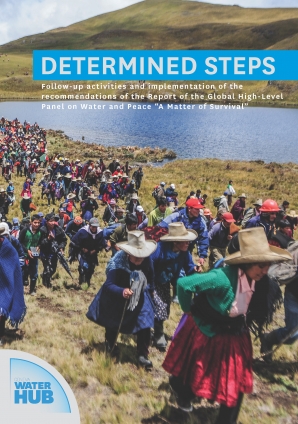 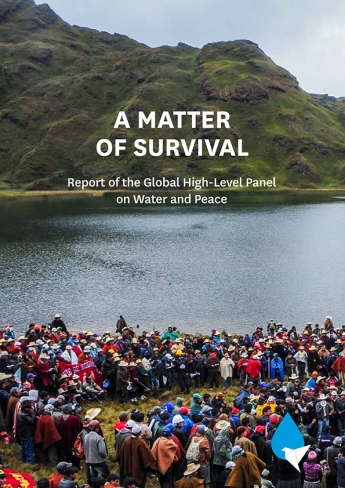 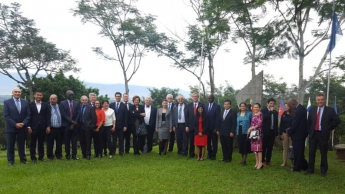 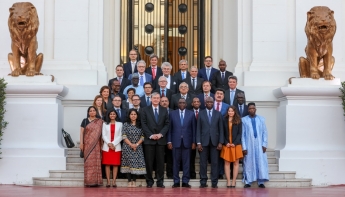 Geneva, Switzerland, December 14-16, 2015 - Launch of the Global High-Level Panel on Water and Peace 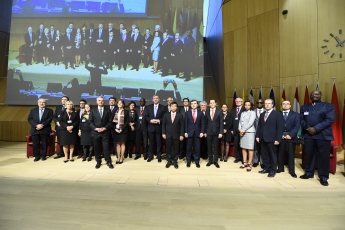